skip to main | skip to sidebar

Today, I received tragic news. A man that I have known and admired for several years passed away. I came to know Leonard over the years both through the parish we attended, St. Joseph's Cathedral in Baton Rouge, LA and The Catholic Answers Forum. His loss was a complete shock to everyone. I can speak from experience and feel confident saying he was a living saint. I hate that he is gone, but it sure is nice to know that someone like him is up in heaven interceding for us all. Please pray for the repose of his soul and for his entire family who is still trying to deal with his sudden loss.
Leonard, I will be forever sad that you didn't make it up here to Charleston like we discussed. It would have been great to see you, eat dinner, and go watch a full dress military parade at my Alma Mater, The Citadel. I will make you a promise though...when I see you again, up in heaven...Dinner is on me!!! You were a great friend, a great mentor...a devout Catholic and a very loving and devoted husband and father. We will always miss you and you will remain forever in my prayers. God Bless
http://www.legacy.com/obituaries/theadvocate/obituary.aspx?n=leonard-eastin-servat&pid=139982145
Posted by Michael Daniels at 8:23 PM 40 comments:

Dominus Vobiscum...I want to talk about something that is near and dear to my heart...The Knights of Columbus. I have had the honor and privilege of being a Knight almost as long as I have been Catholic. I think I have been a Catholic a little less than a week longer than a Knight...as a convert, I always knew I wanted to be a Knight. Currently, I serve as the Deputy Grand Knight of my council and as the Pilot of my Assembly. In both cases, I work with what I consider to be the upper echelon Catholics our Church has to offer...on any given day you will find these guys helping out in various capacities at The Church or throughout the diocese...holding fundraisers...serving at Mass...or standing an Honor Guard at a deceased Knights wake. The Knights of Columbus does so much for the Church and for the community...we have been called the "strong right arm of The Church". In troubled times like we live in today, we need men of principle...honor...integrity....fortitude...charity. Knights are all of those things and more. If you are a practical Catholic man, age 18 or older and in full communion with The Church...then run to your nearest KofC representative at your parish and fill out a Form 100...it will be one of the most rewarding decisions you have ever made...I promise you.
Posted by Michael Daniels at 2:54 PM 4 comments:

Personal Ramblings on the Eve of Thanksgiving

In the past year or so, work has had me all over the place. I have moved 3-4 times in the past year alone. During all of this time, my vocation and the question of what God wants me to do in my life, still looms over my head. I have strongly been considering the priesthood for some time now...but it seems like the last few months I have been experiencing the largest amount of spiritual dryness I have ever encountered. I know that by reading the lives of many saints and talking with many priest, spiritual dryness is something to be expected of those trying to live as a devout Catholic. I have even questioned my vocation during this time...but here as of late, I am trying to embrace this dryness and use it as an opportunity for spiritual growth. We must all pass through this Dark Night on our way to being everything God expects of us. I won't lie, I really do miss those periods of pure bliss...it is so easy to say "I am going to be a priest" or a religious, etc. when you are in a period of pure bliss...on the contrary, it is not so easy to be sure about those things or even live your faith to the fullest when you are going through a period of extreme dryness. Even frequent participation in the Sacraments does not seem to help. I do have moments though when it feels as if that bliss is back...but then it fades away again. I know this is not permanent, and I just pray that I remain faithful to God's purpose for me in life...whatever that may be. In the meantime, I just ask for all of you to pray for me to the Lord our God. God Bless you all. Happy Thanksgiving
Posted by Michael Daniels at 4:37 PM 1 comment: 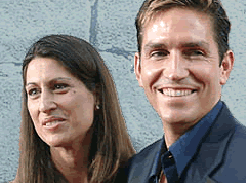 Hollywood, Apr 30, 2008 / 06:08 pm (CNA).- In an interview with “Christopher Closeup,” a radio show for the media apostolate The Christophers, Jim Caviezel described both the deep fear he felt when adopting two children with brain tumors, and the joy he and his wife have received from doing the will of Christ.
Caviezel, best known in Christian circles for his role as Jesus in Mel Gibson’s movie, “The Passion of the Christ”, has been committed to his Catholic and pro-life beliefs for a while. When he was challenged to prove his faith by adopting a disabled child, he and his wife, Kerri, traveled to China where they adopted a five-year old boy who was living in an orphanage.
Caviezel recalled that he was “completely terrified” at the possibility of adopting a child with a disability, but deep within his soul, he knew that God wanted him to do it.
Read the rest of this story here: http://catholicnewsagency.com/new.php?n=12509
Posted by Michael Daniels at 8:58 PM 1 comment: 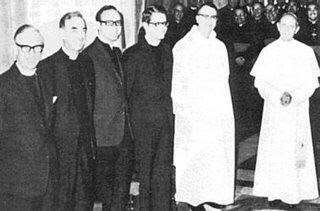 Rome, May. 16, 2008 (CWNews.com) - When Pope Paul VI spoke about the "smoke of Satan" entering the Catholic Church, he was referring to liturgical abuses, according to the prelate who served as his master of ceremonies.
Cardinal Virgilio Noe, the chief Vatican liturgist during the pontificate of Paul VI, spoke candidly about the late Pope's concerns in an interview with the Roman Petrus web site. The Italian prelate-- who was also the Vatican's top liturgist under Pope John Paul I and the early years of the pontificate of John Paul II-- is now retired, and at the age of 86 his health is failing. In his interview with Petrus he concentrated primarily on his years serving Pope Paul VI.
[The full interview has been translated by Father John Zulsdorf on his What Does the Prayer Really Say blog.]
Pope Paul accepted the liturgical reforms after Vatican II "with pleasure," Cardinal Noe said. He added that Paul VI was not be nature a sad man, but "he was saddened by the fact of having been left alone by the Roman Curia." Regarding the late Pope's famous remark about the "smoke of Satan," Cardinal Noe said that he knew what Paul VI intended by that statement. In that denunciation, he said, the Pope "meant to include all those priests or bishops and cardinals who didn't render worship to the Lord by celebrating badly Holy Mass because of an errant interpretation of the implementation of the Second Vatican Council. He spoke of the smoke of Satan because he maintained that those priests who turned Holy Mass into dross in the name of creativity, in reality were possessed of the vainglory and the pride of the Evil One. So, the smoke of Satan was nothing other than the mentality which wanted to distort the traditional and liturgical canons of the Eucharistic ceremony."
For Pope Paul VI, the cardinal continued, the worst outcome of the post-conciliar liturgical reform was the "craving to be in the limelight" that caused many priests to ignore liturgical guidelines. Cardinal Noe recalled that the Pope himself believed in careful adherence to the rubrics of the Mass, firmly believing that "no one is lord of the Mass."
Speaking for himself, the former top Vatican liturgist said that the liturgy must always be celebrated with reverence and careful respect for the rubrics. He said with regret that in the wake of Vatican II "it was believed that everything, or nearly, was permitted." Cardinal Noe said: "Now it is necessary to recover-- and in a hurry-- the sense of the sacred in the ars celebrandi, before the smoke of Satan completely pervades the whole Church."
Posted by Michael Daniels at 8:51 PM No comments:

Football Season is Over Folks!!!

Ok...this is really becoming disturbing. Is there anyone else out there that would love to attend a Mass where everyone follows the Rubrics and the GIRM? The Orans posture has become a scourge, and now apparently a permanent fixture, in the majority of Novus Ordo Masses in this country. This posture, which is only supposed to be adopted by an Ordained Priest is seeing widespread use amongst the laity. Every time I go to Mass, I see someone who has an even more exaggerated version of it. Last Sunday, I thought I was at the superbowl and one of the officials was signaling a Giants touchdown. Where does this stop? I have written about this topic before...but it seems this abuse has reached an all time high. Don't get me wrong...I love the Novus Ordo and do not feel it is a problem with the Mass itself...however, I do blame this problem and the other problems facing the Church such as decreasing vocations and decreasing Mass attendance on poor Catechesis and a few rogue Bishops. Names like Mahony come to mind...and I would like to remind His Excellency, that "Apathy is the glove into which evil slips its ugly hand". I had to search long and hard to find a reverent Novus Ordo Mass...but luckily my parish of St. Agnes has just that...I am also blessed to have Pre-Conciliar Latin Mass there as well...I tell you one thing...at the Tridentine Mass, these types of abuse would never take place. God Bless, Michael
Posted by Michael Daniels at 8:47 AM 1 comment:

Thank you all for your support

It is so to be back after such a long sabattical in 2007. The support I have received from you all for both my vocation to the Priesthood and my blog has been phenomenal. God Bless you all. You are much too kind. I have received mixed opinions on my public endorsement of Alan Keyes...however, there are some like minded Catholics out there who strongly agree with my outlook on Dr. Keyes. As far as presidential Candidates are concerned...his views and public positions are more in line with The Holy See than any other presidential candidate this country has ever seen...I tell you, when I placed my vote for him in the Louisiana primaries, it was the first time I had voted with complete confidence that my vote did not conflict with my Catholic faith and principles.

Thanks once again to you all...I love you all. Vivat Jesus
Posted by Michael Daniels at 9:19 PM 3 comments:

Where is the Honor of Yesteryear...? 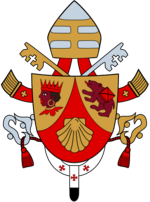 The Papal Coat of Arms

Michael Daniels
Charleston, South Carolina, United States
"In our time more than ever before, the chief strength of the wicked, lies in the cowardice and weakness of good men... All the strength of Satan’s reign is due to the easy-going weakness of Catholics. Oh! if I might ask the Divine Redeemer, as the prophet Zachary did in spirit: What are those wounds in the midst of Thy hands? The answer would not be doubtful: With these was I wounded in the house of them that loved Me. I was wounded by My friends, who did nothing to defend Me, and who, on every occasion, made themselves the accomplices of My adversaries. And this reproach can be levelled at the weak and timid Catholics of all countries." --Pope St. Pius X, Discourse at the Beatification of St. Joan of Arc, Dec. 13, 1908